Jörg Debus and his team at TU Dortmund University in Germany conduct research on materials with high potential for applications in optical quantum information processing, spintronics as well as quantum sensing. The group studies structures, such as quantum dots, as well as 2D materials, semiconducting defects in diamond and rare-earth ions quantum wells. For optically driven spintronics and quantum information processing, the coherent spin manipulation with ultrashort laser pulses requires knowledge about the fine structures of excitons, in particular, the electron and hole g-factors: they define the frequency of quantum bits. In addition to the spin level structures, the interactions between confined carriers play a crucial role, since they limit the quantum information handling due to spin relaxation.

One example of experiments performed by the Debus team are recent measurements on the energy and spin structure of nitrogen vacancies in diamond crystals. Due to their unique electron confinement, the electron spins demonstrate robust coherence times exceeding several seconds at room temperature that are suitable for quantum information and quantum sensing applications. For such use it is important to know the fine structure of energy levels corresponding to different spin states in magnetic fields and understand the interaction mechanisms of charge carriers in the material. The Debus team uses optical spectroscopy to measure these properties and to spectrally resolve the fine structures.

In addition to photoluminescence spectroscopy, another technique used by the Debus team is spin-flip Raman scattering, a process similar to ordinary Raman scattering, however instead of a different phonon state the initial and final material states have different spin properties. The spin-flip signal is detected at a position that is spectrally shifted from the excitation laser line by the energy difference of the spin states. Spin-flip Raman scattering as a resonant process is not only useful for measuring spin levels, but also to prepare carriers confined in quantum dots in specific spin states. Above all, the scattering mechanism helps to identify the spin interaction between electrons and holes. Most experiments in the lab are performed at cryogenic temperatures in magnetic fields, while precisely controlling the energy and polarization of the excitation light.

Figure 1: Top: Scheme of the TriVista setup used for spin-flip Raman scattering. Bottom, left: Raman spectrum shows the spin-flip signal of electrons confined in InGaAs/GaAs quantum dots taken at a magnetic field of 8 T and a temperature of 6 K. The excitation was done at 1.39 eV (892 nm), the detection was provided by a LN2-cooled Spec-10 CCD camera. Bottom right: Scheme of the electron spin flip (blue colored) for resonant σ- circular-polarized excitation of an exciton in oblique magnetic field geometry.

Research in the Debus lab does not only focus on one, but on a broad range of materials. The spectroscopy system needs to adapt to changing signal wavelength and use of lasers at different excitation wavelength or tunable lasers as well as obtain sufficiently high spectral power to resolve the details of the fine structure and interactions of spin states which are tuned by an applied magnetic field.

One problem in resolving the fine structure of, for example, semiconductor quantum dots is inhomogeneous broadening due to a distribution of energy levels caused by small variations in size and shape of the quantum dots. By tuning the excitation wavelength in resonance with specific quantum dot states, the signal of other dots in the sample is suppressed reducing spectral broadening. However, laser excitation will be in close spectral vicinity of the detection signal. The same is true for signals in resonant spin-flip Raman scattering which are slightly shifted by a fraction of an meV (a few cm-1) from the excitation laser line.

Spectroscopic measurements in close vicinity to the laser line are extremely challenging. The intensity of elastic scattered light is often much stronger than the signal and interfere with the detection of weak signals on the detector. Filters have to be used to reduce the amount of laser light before detection. The filters need sharp cutoffs and transitions width to measure close to the laser line, however changing excitation wavelength typically requires use or purchase of additional filters.

The TriVista allows us to perform challenging optical spectroscopy with high resolution as close as a few 100 μeV (0.8 cm-1) from the excitation laser line

The Debus team uses a TriVista TR555 triple stage spectroscopy system to achieve not only high resolution and strong stray-light suppression (for signals close to the laser line), but also flexibility to adapt to the changing experimental requirements such as different materials, excitation and detection wavelengths. Moreover, the intensity of the spin-flip Raman scattering signals is quite low so that a high efficiency of the optical components and detector sensitivity are necessary.

TriVista systems are built from 3 spectrometer stages. By combining the diffractive power of all 3 stages high spectral resolution is achieved up to 300% higher compared to a single stage. Another operating mode combining all 3 stages allows for recording signals in the vicinity of the laser line as close as 5 cm-1 (0.62 meV) using a CCD camera for detection. In this mode of operation, the first 2 stages are linked together in a way to act as a signal bandpass filter that is spectrally dispersed by the third stage. Alternatively, the Debus team sometimes uses the high- resolution mode with a single channel detector (e.g. PMT) for detection. It also achieves high stray-light rejection and is suitable for measurements that do not require the spectral multiplexing advantage of detection using a CCD.

The TriVista system easily adapts to the changing experimental requirements of the lab. TriVista can be quickly adapted to any laser or signal wavelength from the UV to the IR without use of additional edge or notch filters that need to be changed for each operating wavelength.

TriVista systems also operate up to 4 signal output ports (one on stage 1 and stage 2, two on stage 3) and additionally to the combined operation modes described above, each stage can be operated independently of each other. The Debus team uses efficient detectors for visible and IR detection on different output ports as well as intensified CCD cameras such as the PI-MAXfor time-resolved measurements with nanosecond resolution.

Having the capability of high resolution, high stray-light reduction measurements at any wavelength as well as multiple efficient detection and operation options allows the TriVista systems to fulfil the multiple needs and requirements for all aspects of new and quantum material research by the Debus team. 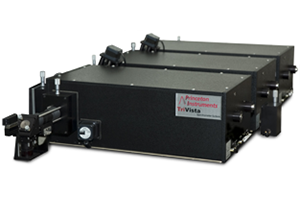