Research in the lab of Haim Suchowski generally centers around controlling ultrafast optical processes on the nanoscale. One of the labs main projects investigates the non-linear interaction of plasmonic nanostructures with ultrashort laser pulses with temporal width of 6-20fs. While it might be often assumed that non-linear interactions require very high light intensities to create a stronger non-linear response, the work in the lab shows that the temporal dynamics of the interaction is as important to consider.

By shaping the temporal profiles of laser pulses a plasmonic system can be pumped dynamically in phase with the non-linear susceptibility. In this we the non-linear excitation ca be steered to obtain higher non-linear interaction at lower energy density of the laser pulses. Thus, by shaping the excitation light pulses non-linear interactions such as second harmonic generation can be tuned, controlled, and enhanced in addition to size and geometry of the plasmonic nanostructures. The group is also interested in applying these techniques to understand and influence the dynamics of molecules and condensed matter system for example 2D materials like graphene that exhibit interesting non-linear dynamics.

For their measurements the group uses a homebuilt micro-spectroscopy setup as this allows them best to optimize for operation over a very wide wavelength range from 400-1100 nm. Also, laser power has to be adjusted to be low enough to avoid damage of the samples, but high enough to maximize the signal. These non-linear signals require very sensitive spectrometer and camera systems for detection.

At the same time, subtle effects on spectral fine structure due to the non-linear interactions require high spectral resolution.

While most spectrometers would not be able to measure the weak non-linear signal levels we see in our experiment, IsoPlane and PIXIS provide the necessary sensitivity we need.

The group finds that the good image quality is also helpful to locate and align the surface plasmonic structures with the spectroscopy system. Due to the modular construction of the IsoPlane, light input can be quickly changed between free space and fiber optics to interface different experiments.

The PIXIS camera is optimized for detection of weak signals. The back-illuminated sensor has almost 100% quantum efficiency in the visible range and operates at very low temperatures to eliminate thermal background signals. Multiple readout speeds make it easy to adapt to either very sensitive experiments that might require long integration times as well as to higher speed operation that is often needed for experiment alignment.

Many data acquisitions run in the lab over several hours while coordinating several pieces of equipment. For synchronization and automation the group uses the ability of Princeton Instruments LightField software to interface with Matlab or Python. In addition to its automation interface, experiment settings can be easily saved an recalled in LightField so experiments can be optimized quickly without having to interface with a complex driver layer to communicate with camera or spectrograph. 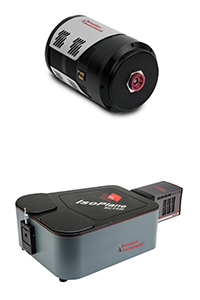