Prof. Darby Dyar’s research group, at Mt. Holyoke College, is studying the geology of extraterrestrial bodies in the solar system including the Moon, Mars, and Venus. The lab mainly uses different forms of analytic spectroscopy, such as Mossbauer, reflectance, Raman, and x-ray. Her group is also utilizing laser induced breakdown spectroscopy (LIBS) to quantitatively characterize different minerals. LIBS in planetary exploration was deployed for the first time on the ChemCam instrument used on the Mars Curiosity rover and has become one of the most important tools for analysing complex minerals on Mars. As part of the SuperCam instrument LIBS will be included in the next Mars exploration mission on the Perseverance rover as well.

LIBS is a technique that focuses a high-power laser pulse onto a target, in this case a geological target, creating a plasma of atoms. As electrons and atoms in the LIBS plasma recombine, they emit characteristic emission lines spanning the UV-NIR wavelength range. These lines can be used to identify and quantify the elemental composition of the target. LIBS has the advantage that it produces a characteristic spectrum without the need to be in contact with the target with remote detection distances of up to several.

Quantitative analysis of LIBS data from Mars requires calibration against reference spectra and analytical models. The reference data should reflect a wide range of mineral and chemical variations, provided mainly by Earth-based measurements. The Dyar group has built the largest geological reference database, including more than 3,500 physical samples of minerals and is working on acquiring reference data to improve the LIBS calibration data for current and future missions to Mars, Venus and the Moon.

Figure 1: LIBS spectra of the improved SuperLIBS instrument at Mt. Holyoke college show the improved resolution and sensitivity compared to a previous generation of the experiment.

A challenge within mineral characterization is handling of the mineral samples. LIBS data is very sensitive to the atmospheric composition and pressure, so measurements have to be performed in environmental chambers. As the focus on the project is to determine the LIBS spectra of different minerals under mars, air and vacuum conditions, opening up the LIBS chamber to change individual samples is time consuming and can result in changes within the local atmospheric environment between sample sets.

The research group built a system for automated measurements of 100 samples at a time to prevent frequent breaking of the vacuum or atmospheric environment. This resulted in the use of a large sample chamber. Samples used by the group are small pellets, of 1 cm diameter, on which 100 different submillimetre measurements need to be taken. This required highly aligned optical set-up, alongside precise focusing of the laser and sample control ass well as high light collection efficiency and optical system throughput for efficient signal acquisition.

As the researchers are creating a calibration database, it is essential that the system used has both high resolution and sensitivity to ensure accurate spectral data for Earth-based minerals and chemically altered variations. While the system has been designed for similar specifications to current Mars missions to ensure comparability it needs to be adaptable to specification changes for future missions.

Princeton Instruments has the most sensitive and flexible spectrometers available

To solve these challenges, Prof. Dyar’s lab implemented three IsoPlane 160 spectrographs, alongside PIXIS cameras and a PI-MAX4 ICCD camera, to recreate a system similar to the SuperCam instruments. The PIXIS cameras were built using custom specified CCD sensors matching devices used in SuperCam. One of the IsoPlane 160 spectrographs used a PI-MAX4 ICCD camera using gated operation to measure time evolution of the LIBS plasma recombination emission down to nanosecond timescales.

The system used a three channel “demux” device to split the collected signal into three distinct wavelength bands addressed by one of the Isoplane spectrographs. Custom designed Acton Optics dichroic mirrors to maximize the signal coupling into each channel, while minimizing any out of band stray light. For each channel signal is then coupled into a fiber bundle, which increases light collection efficiency while maintaining high resolution. The aberration corrected optical design of the IsoPlane 160 ensures optimal signal to noise as light from the fiber bundles is accurately focused across the sensor. Ultimately, the high sensitivity and flexibility of the IsoPlane made it the ideal solution for both large sample sets, and small sample areas. 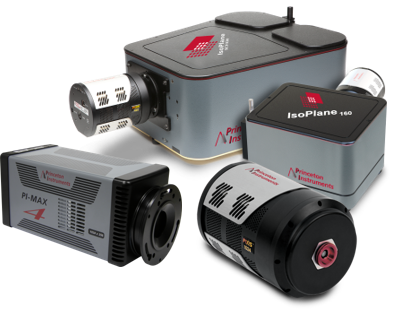