The fusion diagnostics and control group led by Ted Biewer at Oak Ridge National Laboratory specializes in measuring and monitoring properties of plasmas in fusion experiments. We talked to Drew Elliott, a scientist in the group: “What we do in our group is develop and operate diagnostics to better characterize a lot of these experiments.” While several groups and experiments worldwide are searching and developing ways to create more efficient and economical fusion experiments, measuring key parameters of fusion plasmas remains challenging. “We are diagnostic experts and are able to make more accurate measurements or make new measurements which other groups either don’t have the personnel, hardware or expertise.”

In an effort to bring their expertise to multiple fusion labs around the world, the researchers recently developed a compact and portable system that can be transported and operated at different experiment sites. The instrument implements a technique called Thomson scattering (scattering of electromagnetic radiation by charged particles) which Dr. Elliott explains as basically being a very accurate way to measure temperature or density in hot plasmas. Using optical methods is crucial in this process as physical probes would be destroyed in the hot and harsh environments found in fusion plasmas.

Using their new setup the group will be able to support experiments worldwide by giving them diagnostic capabilities and information that they did not have before.

The main challenge in developing the new setup was that the spectroscopy system needed to be compact enough to be transportable, but also have flexibility to adapt to a wide range of experiments that could have very different parameters. For example, plasma temperatures might range from relatively cold plasmas (at around 1000 times room temperature) to temperatures approaching those inside of the sun. Dr. Elliott explained that the temperature limit that can be measured using their spectroscopic technique essentially depends on the spectral bandwidth of the spectrograph which should be able to adapt its spectral range for different experimental situations.

One problem, encountered in conventional spectrographs is that their instrument response function changes significantly between the center and edges of the camera sensor due to optical aberrations. Spectral lines would then change size and shape depending where on the sensor they are observed. The team required a better instrument response so complex and difficult corrections in data processing could be avoided.

Experiments on plasmas also require detectors capable of very short exposure times to suppress the very bright background radiation of the hot plasma. If the exposure is timed precisely with the signal from a short laser pulse, this background light can be effectively negligible compared to the laser signal.

“Overall, the IsoPlane and PI-MAX combination allowed us to set up a compact system that achieves the required measurement capability”

The group implemented a spectroscopy system consisting of IsoPlane-320 spectrographs and PI-MAX4 ICCD cameras for their transportable diagnostic system. The IsoPlane-320 has an advanced optical system, compared to conventional lab spectrographs, that minimizes optical aberrations. As a result, the instrument response and resolution remain constant across the detector. Low aberrations also allow for observation of a larger number of spectral tracks. Thomson scattering experiments often use multiple fiber optic inputs, addressing different locations in the experiment. This spectrometer and camera configuration allows the Oak Ridge team to observe all these channels simultaneously.  IsoPlane spectrographs also come equipped with a triple grating turret, so the spectral bandwidth can be changed quickly by switching to gratings with larger or smaller groove density.

Moreover, the PI-MAX4 intensified CCD camera allows for nano-second gate times, necessary to suppress the bright plasma background. The gate opening can be synchronized with picosecond precision to the signal induced by the fast laser pulses.

“Overall, the IsoPlane and PI-MAX combination allowed us to set up a compact system that achieves the required measurement capability.” 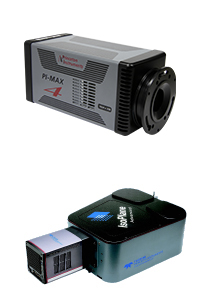