Complementary metal-oxide-semiconductor (CMOS) sensors are a technology that has been around since the 1990s. Early CMOS cameras were competing with the more mature CCD technology, but over the 1990s and early 2000s CMOS sensor technology improved to the point where CCD technology was overtaken to become the sensor of choice for consumer digital cameras. This technology was then improved further still to fulfil the higher requirements essential for scientific imaging.

CMOS sensor technology differs from CCD sensors as instead of having all sensor pixels fed through one output node, one amplifier and one analog-to-digital converter (ADC) as with a CCD sensor, CMOS sensors work in parallel by having a miniaturized capacitor and amplifier on every pixel, and an ADC for every column (as shown in Figure 1). Each ADC acts simultaneously, reading out entire columns rather than individual pixels of the whole sensor. This makes the process much faster and requires 100x less power than CCD sensor architecture.

In 2009, scientific CMOS (sCMOS) technology was launched, with sCMOS cameras being commercially available in 2010-11. sCMOS cameras are able to provide low noise, high speed, and a large field of view, making sCMOS cameras ideal for a wide range of applications, from astronomy to microscopy.

sCMOS sensors differ from CCD sensors as they typically have a rolling shutter. Image acquisition begins at the top of the sensor and works its way down, row by row. This allows the sensor to acquire images at much higher framerates with much lower read noise. The speed of an sCMOS camera directly relates to the number of rows, and the row time (i.e. the time between acquisition of one row and another).

Rolling shutters switch “on” and “off” by clearing the charge that is already within one row and measuring any new incident photons. This allows for an overlap between the acquisition of the current pixel row of a frame (which is acquiring an image), and the lower pixel rows of the previous frame (of an image being readout) (Figure 2).

The differences in CCD and sCMOS sensor architecture provide both advantages and disadvantages. Some of the advantages of sCMOS technology over CCD technology are as follows:

Although sCMOS technology is advantageous to CCD technology in a number of ways, it does have some disadvantages:

sCMOS sensors take advantage of active circuit integration into individual pixels. This allows each pixel to be read out individually. There is also an analog-to-digital converter attached to each column, allowing much higher frame rates while still maintaining low read noise, large field of view and high power efficiency.

Although there is an increase in temporal noise and fixed-pattern noise due to the increase in active circuits on the sensor, sCMOS technology is still advantageous from a wide range of applications. 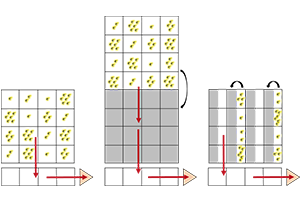 CCD sensors are silicon based semiconductors which capture photons and covert them into photoelectrons. This is converted into a digital signal and read out by the camera. 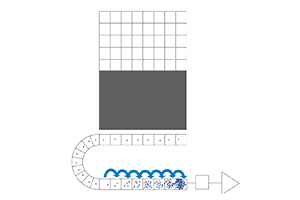 Electron multiplying CCD (EMCCD) sensors are a variant of CCDs which capture a low number of photons and convert them into a high signal. 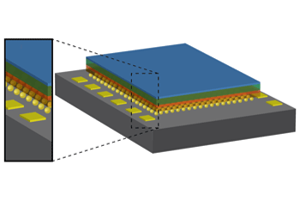