Recently, a team of scientists working in North America and Europe developed an innovative growth and imaging platform, known as GLO-Roots, that allows root architecture and gene expression to be studied in soil-grown plants.

This application note will outline some of the research conducted by the GLO-Roots team, which is led by Dr. José Dinneny at the Carnegie Institution for Science’s Department of Plant Biology on the Stanford University campus

The GLO-Roots platform comprises four parts: (1) growth vessels, called rhizotrons, that permit plant growth in soil as well as imaging of roots; (2) luminescence-based reporters that allow various aspects of root biology to be tracked in living plants; (3) GLO1, a luminescence-imaging system designed to automatically image the rhizotrons; and (4) GLO-RIA, an image
analysis suite designed to quantify the root systems imaged utilizing GLO1.2 An example of an experimental setup using the GLO-Roots platform is presented in Figure 1.

Whereas most commercially available luminescence imaging systems for biomedical research are optimized for imaging horizontally held specimens or samples in microtiter plates, placing the rhizotrons in this position would induce a gravitropic response in plants. Therefore, GLO-Roots utilizes a custom-designed imaging system (known as the Growth and Luminescence Observatory 1, or simply the GLO1) that has been optimized specifically for imaging dual-reporter luciferase expression in the GLO-Roots rhizotrons.2

Two PIXIS:2048 back-illuminated CCD cameras from Princeton Instruments are mounted on top of each other so as to capture partially overlapping images of a rhizotron, while a motorized stage automatically rotates the rhizotron to capture images of both sides (refer to Figure 1E). A composite image is then generated from the images captured of each side. Figure 1F shows that approximately half of the root system is revealed on each side, with a few roots being visible on both sides. The soil sheet is thick enough to block light from portions of the root system, yet thin enough to ensure its continuous structure can be compiled from opposite-face views. The entire GLO1 imaging system is enclosed in a light-tight black box that is equipped with a door to permit the loading and unloading of rhizotrons.2

Not only do the PIXIS:2048B cameras afford the GLO-Roots researchers the desired spatial resolution and field of view, but also the excellent low-light-level sensitivity required to detect the emission wavelengths of the different reporters used. Table 1 lists the luciferases employed for the Arabadopsis-related GLO-Roots study.

Here, root traits such as directionality can be observed through later stages of plant development (notice the 35 DAS root system image and the 35 DAS directionality analysis shown in Figures 2A and 2B, respectively). A time series spanning 11 to 21 days after sowing Arabadopsis accession Col-0 roots expressing reporter ProUBQ10:LUC2o is presented in Figure 2A and Figure 3; a color-coded time projection is shown in Figure 2C.

Directionality analysis indicates a progressive change in root system angles, from 0° (vertical) to 55°, as lateral roots take over as the predominant root type. Figure 2D shows the evolution over time of several root traits that can be automatically captured by GLO-RIA (depth, width, area) and others that were manually quantified (primary root growth rate or number of lateral roots per primary root.2

To date, the GLO-Roots team has published data pertaining to the continuous imaging of root growth; the root system architecture of different Arabidopsis accessions; the utilization of spectrally distinct luciferases to capture additional information associated with gene expression patterns, characterization of root system interactions, and microbial colonization; adaptive changes in root system architecture under water deficit, phosphorus deficiency, and light; the suitability of the GLO-Roots platform for studying additional plant species; and more. The research team is also highly interested in discovering how other environmental stimuli affect root growth and whether such responses differ between accessions of Arabidopsis.2

Each of the PIXIS:2048 cameras integrated in the GLO1 imaging system utilizes a CCD featuring a back-illuminated sensor whose large photosensitive array is composed of 2048 x 2048 pixels (see Figure 3). By employing Princeton Instruments’ exclusive XP cooling technology, these four-megapixel cameras achieve thermoelectric cooling down to -70°C via an all-metal, hermetically sealed design. This innovative cooling technology ensures maintenance-free operation and is backed by the industry’s only lifetime vacuum guarantee.

Complete control over all PIXIS hardware features is simple with the latest version of Princeton Instruments’ 64-bit LightField® data acquisition software, available as an option. A host of novel functions for easy capture and export of imaging data are provided via the exceptionally intuitive LightField user interface 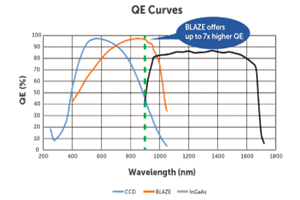 A New Dawn For NIR Spectroscopy 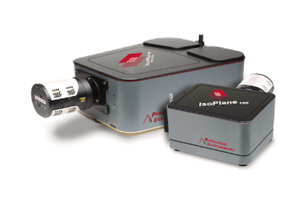 Find out our highly sensitive spectroscopy and camera capabilities for fluorescent decay to determine what is right for you.