For decades, x-ray and UV-vis-NIR detection methods have been used in various scientific, military, medical, and industrial applications. Although generally employed with success, these detection systems nonetheless still possess some limitations when utilized for such types of work.

Effectively leveraging the good sample penetration afforded by x-rays, for example, can prove difficult for personnel in the field owing to the need for a compact, high-power x-ray tube, as well as a basic lack of system portability. Alternatively, UV and visible wavelengths are quite easily detectable using silicon-based CCD technologies but are unable to penetrate samples deeply enough due to reflection and scattering of light.

CCD cameras can detect NIR-I wavelengths between 750 and 1060 nm, providing slight penetration into samples (~3 mm), but above this threshold the silicon itself is transparent to light. Such CCD camera systems have therefore found somewhat limited use in military (e.g., surveillance) and commercial (e.g., inspection) applications.

The NIR-II window / short-wavelength infrared (SWIR) range, which extends to 1700 nm, achieves penetration to ~10 mm (see Figure 1). Spurred on by the development of SWIR sensitive InGaAs and InSb detectors, work in this range has opened up a new world of scientific, military, medical, and industrial applications.

Unfortunately, early NIR-II / SWIR detection systems also still had key limitations for many of the aforementioned applications. Insufficiencies associated with camera system linearity, noise performance, and synchronization with external equipment, as well as the lack of sufficient flexibility to control exposure times all presented critical obstacles.

The ability to quickly acquire PL imaging data in the defect band between 1300 and 1600 nm at any stage of the manufacturing process [2–5] is expected to aid in the clearer identification of a specific defect’s material composition or impurity. The data could also be utilized to better inform process modifications aimed at eliminating defects and improving the efficiency of individual solar cells. In this way, PL imaging in the NIR-II / SWIR range via state-of-the-art InGaAs FPA cameras can help increase yield as well as reduce manufacturing costs.

In recent years, research groups around the world have been developing different agents [1, 6–11], to be used with the NIR-II / SWIR window in small-animal imaging for preclinical research, with the ultimate goal of earlier disease detection in human patients. Most of these approaches are based on one of three primary technologies: single-walled carbon nanotubes (SWNTs), rare earth–doped phosphors, or quantum dots.

Each approach utilizes a similar experimental setup, whose main elements are NIR-I illumination, a specimen (e.g., a mouse), and a camera system to detect emitted light in the wavelength range from 1100 to 1650 nm. See Figure 5.

All images acquired in the NIR-I region employing IRDye-800 fluorescence showed indistinct vascular anatomy within the mouse; however, the detection of SWNT fluorescence in the NIRII / SWIR window provided substantially improved spatial resolution of vessels in the same mouse at all magnifications.

Further examples of the utility of the NIR-II / SWIR spectral range can be seen in the areas of astronomy and spectroscopy. The two images of sunspots displayed in Figure 7 were acquired using a Princeton Instruments NIRvana:640 InGaAs camera at Yunnan Observatories’ Fuxian Lake Solar Observing Station in China.

The main instrument hosted by the station is the New Vacuum Solar Telescope (NVST), a 1 meter IR solar observation telescope. The primary scientific mission of NVST astronomers consists of obtaining high-resolution images and spectra of the sun at wavelengths ranging from 0.3 to 2.5 µm for the purpose of studying fine structures of solar magnetic fields, as well as investigating evolutionary processes in high temporal and spatial resolution.

Figure 8 presents a final example of work in the NIR-II / SWIR range. At Brown University, a NIRvana:640 InGaAs camera coupled to a high-precision spectrograph from Princeton Instruments was utilized to produce a topographical rendering of energy-momentum-resolved spectroscopy.

First and foremost, either maintenance-free thermoelectric cooling or liquid nitrogen can be employed to chill the NIRvana’s two-dimensional 640 x 512 InGaAs FPA detector down as low as –85°C or –190°C, respectively. A proprietary cold shield design and vacuum technology facilitates the lowest possible dark noise, which helps increase sensitivity as well as preserve signal-to-noise ratio (SNR) for long exposure times.

Thermoelectrically cooled NIRvana cameras have the ability to expose from 2 μsec up to many minutes. LN-cooled NIRvana camera exposure times can range from 100 μsec up to 1 hour. Ultra-low-noise readout electronics help ensure good SNR even when the cameras are operated at their maximum full-frame readout rates (i.e., 110 full fps for thermoelectrically cooled cameras; 2.77 full fps for LN-cooled cameras). Furthermore, excellent system linearity means that NIRvana cameras are highly reliable for scientific research. 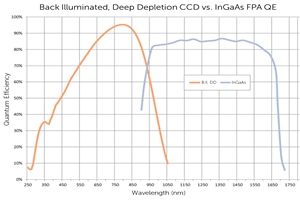 Technical note describing the composition of InGaAs cameras, how they compare to silicon-based CCDs, InGaAs limitations and InGaAs advantages. 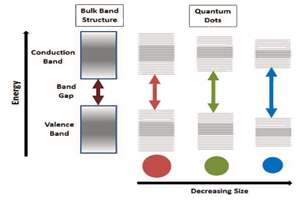 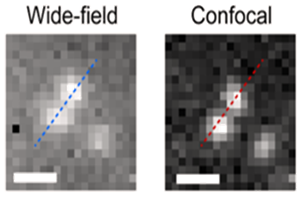