Near-infrared (NIR) fluorescent is a technique used widely within biological and medical research due to ability for NIR light to penetrate deeply in biological specimens, the high spatiotemporal resolution that it offers, and the capability to image quickly (Fan 2019).

However, the absorbance of water increases above 1400 nm, therefore, the optimal region for NIR imaging in biological tissues is between 800 and 1400 nm, resulting in better spatial resolution and penetration depths (Fan 2019, Zhu 2019).

Imaging of these fluorophores requires cameras sensitive to NIR-II wavelengths. Due to the size of the bandgap, silicon-based camera sensors are not sensitive to light above 1100 nm. Scientific cameras based on InGaAs FPAs have a high quantum efficiency in the 900 – 1700 nm wavelength range, therefore, they are optimal for NIR fluorescence imaging (Smith 2009).

Over the past decade, new NIR-II probes are being developed, with more techniques being explored from in vivo imaging to optical microscopy. A research group at École Polytechnique Fédérale de Lausanne (EPFL), led by Prof. Ardemis A. Boghossian, has published an article showcasing the first spinning-disc confocal light microscopy (SDCLM) in the NIR-II optical window (Zubkovs 2018).

The first author of this work, Dr. Vitalijs Zubkovs, has compared optical resolution of the SDCLM with a wide-field NIR-II microscope, allowing for fast, real-time image acquisition. Through the use of a cooled InGaAs FPA camera coupled to a NIR-II optimized spinning-disc module (SDCLM-InGaAs), they demonstrated the benefits of the device in three applications:

SDCLM is a confocal microscope with additional spinning disc with multiple pinholes etched onto the surface, as shown by the schematic in Figure 1. When spun at high speeds, these pinholes allow for images to be acquired across a much larger surface area. This increases the speed of acquisition and reduces any photo damage of the sample. By varying pinhole size, disc speed and pinhole spacing alterations in image contrast, brightness and quality can be controlled.

To learn more about the different types of SDCLM please see the Educational Resource by Teledyne Photometrics.

The EPFL team measured lateral and axial resolutions of the setups and compared it to the theoretical values which were calculated in Equations 1 and 2.

where rx and rz are the resolution in the lateral (x-axis) and axial (z-axis) direction respectively, Fx and Fz are the FWHM pre-factor in the lateral and axial direction (determined by the diameter of the pinholes on the spinning-discs),  is the wavelength, and λEM is the numerical aperture.

SDCLM experimental set up with NIR-II

The EPFL researchers coupled an InGaAs camera (NIRvana-ST, Teledyne Princeton Instruments) to a spinning-disc module (CrestOptics) fixed on a microscope body (Nikon Eclipse), shown in Figure 2. Traditional light microscopes typically do not have anti-reflective optics in the NIR-II region; therefore, the throughput of photons is minimized due to absorption from the optical components. Hence, coating of the lens within the spinning-disc confocal was imperative to maximize photon throughput.

SDCLM systems are advantageous as they enable fast image acquisition with higher lateral and axial resolution than wide-field imaging. The spinning-disc within the system is designed to achieve a maximum theoretical acquisition speed of approximately 18000 fps (~50 ms exposure time).This requires the disc to rotate at a speed of 15000 RPM. By using an InGaAs camera with a frame rate of 110 fps (9 ms), the researchers were able to establish an optimal acquisition time of 20 fps (50 ms) to image NIR beads with acceptable signal-to-noise ratio.

Using this system, the researchers at EPFL used a wide-field microscope with an InGaAs camera, to image two neighboring NIR fluorescent beads immersed within oil. When the distance between the beads was less than 600 µm, they were not optically resolved in the wide-field system. However, the SDCLM-InGaAs system provided an improvement in contrast of the obtained image, improving the separation between the beads, as shown in Figure 3. Measured lateral and axial resolutions in the SDCLM microscope at 980 nm were 0.5±0.1 µm and 0.6±0.1 µm respectively. Compared to the wide-field system obtained improvement in the resolution was 17% in lateral and 45% in axial direction.

Enhancement in spatiotemporal resolution in the NIR region could expand new horizons in studies which involve in vitro and in vivo imaging. In the recent decades, many biological and medical studies focus on understanding living cell and nanoparticle interaction better. Some cells are able to uptake functionalized particles that penetrate organelles inside the cell (Feng 2019, Kodiha 2015, Chen 2019). Organelles which are present is plant cells are chloroplasts, which are interesting subject to study because of their light energy harvesting bio-function.

As chloroplasts absorb over a wide range of visible light, and also autofluoresce, it becomes challenging to image any chloroplast-internalized particles labeled with visible dyes. Therefore, NIR-II fluorophores, such as SWCNTs, can be employed in nanoparticle uptake studies to draw more accurate conclusions on how nanoparticle surface functionalization promotes or inhibits their uptake in organelles. The SDCLM-InGaAs microscope allowed for clearer localization of SWCNTs within chloroplasts through improved resolution and contrast – indicating that a DNA coating was optimal for SWCNT uptake.

The EPFL team pioneered the demonstration of the first spatiotemporal glucose nanosensor, which allowed the tracking of axial diffusion of glucose in agarose gel at the microscopic level. In the future, such sensors could be immobilized within a gel matrix and implanted in vivo for continuous analyte monitoring (Marchetti 2020, Zhang 2019, Kamanina 2019).

For example, glucose oxidase (GOx) enzyme-functionalized SWCNTs can be used as glucose-specific sensors (Zubkovs 2017, Kamanina 2019). Changes in the fluorescence intensity of the GOx-SWCNT nanosensors is proportional to the change in glucose concentration. During the experiment, as the glucose diffused and interacted with the GOx-SWCNTs dispersed within the gel matrix, the SDCLM-InGaAs microscope monitored the sensor response at different axial sections of the gel, as shown in (Figure 4). Although this can also be achieved via wide-field imaging, SDCLM imaging allowed for smaller axial segments to be imaged giving a more representative diffusion gradient.

The researchers at EPFL have clearly demonstrated that the use of a SDCLM in combination with an InGaAs camera will be highly beneficial to biological and medical research, especially when investigating in vitro and in vivo biosensors. NIR-II is the perfect wavelength range to obtain high-resolution images of biological tissue with reduced photon scattering, autofluorescence and increased penetration depth. Merging optical microscope techniques, such as SDCLM to increase image acquisition times and scanning surface area, and sensitive cameras, such as InGaAs, high resolution real-time imaging of biological tissues and bioprocesses can be achieved.

As InGaAs cameras are highly sensitive within the 900 – 1700 nm range they are ideal for NIR-II imaging. InGaAs cameras are also advantageous as they are deep-cooled to reduce dark noise. Dark noise is the noise produced from the electric current flowing through photosensitive devices. Further information regarding InGaAs FPA cameras and their advantages can be found in the Technical Note by Teledyne Princeton Instruments. 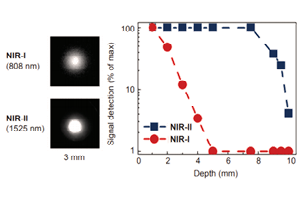 Brief summary of how the NIR-II window can be used in medical applications such as cancer detection, imaging of circulatory and studying skeletal systems. 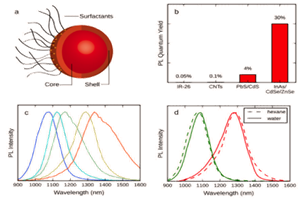 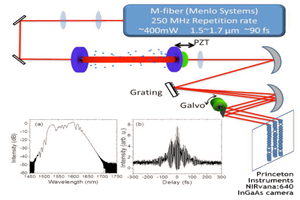 InGaAs cameras can be used to investigate greenhouse gases in the fingerprint SWIR region, as shown by the research of Prof. Hans A. Schuessler.