Time domain astronomy is the study of how astronomical objects and unique events vary over time. It provides an alternative method to understanding the extreme phases of galaxy and stellar evolution, through the investigation of events such as supernovae, and gamma-ray bursts, indicative of the collapse of massive stars and the creation of neutron stars or black holes, and objects such as variable pulsars and stars, to name a few. Characteristics of these events can be periodic, random, and bursting in nature, with variation across all objects and events. This makes time domain astronomy a challenging key field within astronomy and astrophysics.

Time domain astronomy covers much of the electromagnetic spectrum. It utilizes both dedicated satellites, looking at regions of the electromagnetic spectrum that are absorbed by the atmosphere, and dedicated ground-based, fully robotic telescopes. These systems work together to capture the optical, infrared, and radio waves, describing the full electromagnetic profile associated with each astronomical object or event. Typically, the dedicated satellite will detect a new event, triggering the remote, robotic telescope to point at the event (or object) and begin acquiring.

There are different methodologies used for capturing temporal information of these variable objects. Imaging is a useful technique for visualizing these temporal changes, with spectroscopy typically utilized for looking at the chemical compositions of each object or event. Polarimetry is another common technique used within time domain astronomy to understand the associated variability in magnetic field. This is particularly useful for gamma-ray bursts, with the polarized light highlighting variations within the magnetic field of the burst.

These events can vary drastically in timescale, with some events lasting only a few milliseconds, and others lasting several years. As these events are unique, it is essential that the devices used to capture any variation on the very small timescale are optimized.

As there is a lot of variance between these astronomical events, with each being truly unique, the light intensity of the source is often unknown. To avoid potentially saturating the sensor, typically a large number of frames are taken at short exposure times. Although this method reduces the likelihood of saturation, the shorter exposure time limits the number of photons that can be detected. Therefore, a high quantum efficiency is essential to ensure that a high proportion of photons detected are converted into photoelectrons and therefore signal.

A high quantum efficiency is also important as integration over longer periods of time is not feasible within time domain astronomy. Once astronomical events are over, they typically fade, sometimes within a matter of minutes. A higher quantum efficiency allows for these fainter signals to still be detected even though the event has finished (i.e. measurement of the residual signal from the event).

To gain the most out of the information gathered during the fading of an event, the images acquired are typically stacked. To maintain a high signal-to-noise ratio of these stacked images, a low read noise is required, so that fainter stars or aspects of the event/object can still be detected. When frames are stacked, not only the signal is summed, but also the read noise, so low read noise is essential. Computational stacking also allows for atmospheric turbulence to be partially corrected for, making a low read noise as integral as a high quantum efficiency.

COSMOS, the large format, back-illuminated CMOS camera from Teledyne Princeton Instruments, has many of the camera qualities required for time domain astronomy. As it is back-illuminated, COSMOS has a high quantum efficiency over the visible range, with >90% peak quantum efficiency as shown in Figure 2. This means that it will be able to convert a high percentage of photons into photoelectrons, even with shorter exposure times. COSMOS also has a low read noise, with the ability to achieve down to 0.7 e- read noise. This make the COSMOS suitable for not only imaging the early stages of an event, or object, but also detect any event afterglow. This low read noise is also advantageous for stacking of frames, maintaining a high signal to noise ratio even with the summation of frame read noise.

COSMOS has a large imaging area, with 3k x 3k, 6k x 6k, and 8k x 8k formats, all with 10 μm pixels. COSMOS has a sensor diagonal of 43 mm, 92 mm, and 115 mm respectively, as depicted in Figure 3. These large imaging areas allow for the capture of multiple reference stars within each frame, ensuring a high level of image comparison and calibration.

Due to the low dark current and large sensor areas, full frame CCDs have been traditionally used within time domain astronomy. In order to completely block any incident light during readout, full frame CCDs utilize a mechanical shutter. Mechanical shutters have finite lifetimes and often need to be replaced frequently when the camera is in heavy use. This can be problematic for telescopes used within time domain astronomy, as they are typically fully robotic, remote telescopes, meaning that maintenance can be challenging.

Additionally, opening and closing a mechanical shutter is relatively slow, introducing quantitative errors for the shorter exposure times essential for time domain astronomy. As COSMOS is a CMOS detector, it utilizes a fast, electronic shutter where exposure is stopped by shifting detected photoelectrons into a frame storage area before readout. Not only is an electronic shutter more precise than a mechanical shutter, but also leads to less dead time of the detector, during which the camera is not exposing to light. This means that subsequent exposures can already start as signal is readout from the storage area, allowing image capture of the entire event, rather than periodic snippets.

As time domain astronomy relies on the synergy between dedicated satellites and ground-based telescopes, it is common for the telescopes to be robotic and remotely controlled. Therefore, it is key that any camera or device can easily integrate into the existing software. COSMOS will be completely controlled by PICam, a software development kit from Teledyne Princeton Instruments.  PICam is available for both Linux and 64-bit Windows, allowing complete control of COSMOS in either of these operating systems. PICam offers direct control of the camera, with flexible configuration and integration with other languages such as Python. In this way, COSMOS can easily integrate into the software controlling any remote, robotic telescope.

Time domain astronomy is the study of how astronomical objects and events vary and change with time. It is a research area that utilizes a lot of different techniques to understand the most about each unique event.

Typically, time domain astronomy takes multiple images with short exposure times to prevent saturation of the sensor, requiring a camera/device with high quantum efficiency and low read noise (to maintain high signal to noise ratio when stacking frames). In addition, as each event is unique, the true brightness is unknown, so multiple reference stars are required to ensure calibration of the object of interest. To measure multiple reference stars within an image, a large physical sensor area is required.

The COSMOS, with peak quantum efficiency >90%, low read noise down to 0.7 e-, and sensor sizes up to a diagonal of 115 mm at 8k x 8k pixels, meets the essential parameters for time domain astronomy. In addition, the reduced error from its electronic shutter, and software development kit for full control with integration into operating systems such as Linux, makes the COSMOS optimal for time domain astronomy. 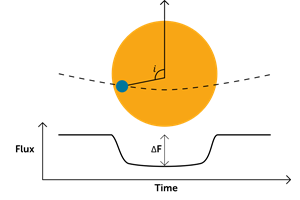 COSMOS for the Detection and Characterization of Exoplanets

Find out how the COSMOS is the ideal camera for transit photometry and radial velocity, two of the most common exoplanet detection and characterization methods. 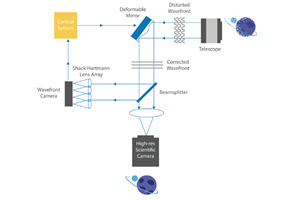 Find out how advanced CMOS provides an alternative to EMCCDs for dynamic, faint astronomy when there are more than a few photons signal. 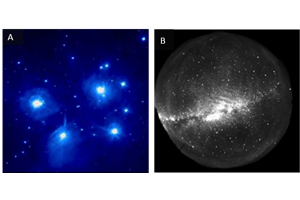