Ground-based optical astronomy investigates various objects in space, from galaxies to exoplanets, via visible light. Some of these objects are dynamic and move at high speed through the sky. Traditionally, observation of these dynamic objects and events has been limited to EMCCD cameras due to their fast frame rates and high sensitivity. However, EMCCD cameras are limited by excess noise factor when the signal is greater than a few photons.

The most recent advancements in CMOS imaging technology deliver low read noise and high quantum efficiency within the visible range, increasing their detection capability for ground-based optical astronomy. CMOS cameras, like EMCCDs, also have fast frame rates but are not limited by excess noise factor. Therefore, state-of-the-art CMOS cameras are now the ideal choice for observing dynamic events in space.

Ground-based optical astronomy is essential for many astronomical investigations. Most objects in space can be observed via visible light (380-700 nm), to study, for example, supernovae remnants or how stars develop [1]. Some objects and events move in space at high speeds, such as near-Earth objects, requiring a fast camera to capture any changes [2].

One of the limitations of ground-based astronomy is image deformation caused by atmospheric turbulence. Techniques such as adaptive optics and lucky imaging have been developed to counteract the effect of the atmosphere. Lucky imaging is a technique which acquires multiple images very quickly so that turbulence motion is “frozen.” Sharp images can then be collated during post-processing to improve the overall resolution of the image.

Adaptive optics, another technique, uses wavefront sensing to counteract the effects of atmospheric turbulence. A traditional camera can be transformed into a wavefront sensor by the addition of lenslets. These lenslets can either be located outside of the camera or incorporated into the camera so that they are close to the sensor. The lenslets measure distortions in the wavefront, allowing software to feed corrections back to the telescope to counteract atmospheric distortions. Figure 1 shows a schematic of how an adaptive optics system operates.

Cameras employing wavefront sensors must have sufficient frame rate to react to the rapidly changing atmosphere, especially when it is unstable. These cameras also require low read noise alongside high sensitivity so that faint reference stars can be used for atmospheric correction. It is not always guaranteed that a bright reference star is located near the scientific object of interest, in which case a faint reference star within close proximity must be used. Therefore, wavefront cameras with higher sensitivity and lower noise are advantageous to capture these fainter reference stars [3].

Although the majority of visible ground-based astronomy utilizes silicon-based CCDs, these sensors are limited when it comes to high-speed astronomy observations. Standard CCD detectors have relatively high read noise and read out at a slow rate, preventing fainter, dynamic objects from being investigated.

Electron multiplying CCDs (EMCCDs), are a variant of silicon-based CCDs that are able to overcome these limitations through the use of an extended serial register called the electron multiplier register (EM register), on the sensor [4,5]. The EM register uses electron multiplication to elevate electron signal greatly above the read noise floor. This allows for higher sensitivity during low-light acquisition.

When dynamic objects are observed they require faster acquisition in order to capture any changes, however this results in a lower exposure time and therefore minimal photon detection. By using an EM register, EMCCDs are able to amplify any detected photoelectrons before they are read out, making the read noise effectively negligible and allowing for the observation of dynamic, faint objects.

In this EM register, photoelectrons are accelerated via an increased voltage along each stage of the register, with secondary electrons generated via the impact-ionization process (Figure 2). The quantity of secondary electrons can be controlled by altering the clock voltages within the EM register. As this amplification of electrons elevates the signal far above read noise, the read noise can be very high at the point of measurement. This means that the readout process can be driven at a much faster rate than on a regular CCD, achieving higher frame rates.

EMCCD sensors also have frame-transfer architecture in which the sensor is divided into an imaging capture area which captures any incident photons, and the storage area onto which any detected photons are rapidly transferred after acquisition (Figure 2). While the storage area is being read out by the system electronics, the image array can be exposed to light again allowing for continuous operation at high frame rates. This allows EMCCDs to operate at a much faster rate than ‘Full Frame’ CCDs which require a mechanical shutter to close during readout.

The combination of both negligible read noise and fast readout makes an EMCCD camera a good option for imaging faint, high-speed objects. However, while EMCCDs are an improvement on CCD technology for dynamic observations, they come with their own limitations.

EMCCDs are ideal for amplifying single-photon signal due to the EM register; however, this advantage breaks down when the signal is greater than a few photons.

EMCCDs are also limited by EM gain decay, whereby with use, the ability of the EM register to multiply signals diminishes. Although not fully understood, it is thought that charge builds up in the silicon sensor reducing the effect of the EM gain. The EM gain will decay at a faster rate both if a high EM gain is used and if there is a high signal intensity. This means that the EM gain will not remain consistent over long periods of time, limiting quantitative analysis. This reduces the lifespan of an EMCCD, requiring regular calibration and limitation of the EM gain to preserve camera longevity [6].

To find out more about EMCCD sensor technology, please refer to EMCCDs: The Basics.

Complementary metal-oxide-semiconductor, (CMOS), sensors are also silicon-based sensors that are able to capture photons within the visible range. Although CMOS sensors have frame times shorter than EMCCDs despite higher pixel counts, and are therefore able to more rapidly acquire data, the traditional front-illuminated sensors were not considered for high-speed astronomical observation due to high read noise and low quantum efficiency.

Advancements in CMOS technology have improved the QE and lowered the read noise to match that of a typical EMCCD, without the presence of the excess noise factor. For example, the Teledyne Princeton Instruments COSMOS™ camera offers 0.7 e- read noise due to advanced electronics, with back-illuminated technology providing a peak QE of >90%, as shown in Figure 3.

Front-illuminated CMOS technology illuminates the sensor with incident light from the front, meaning that the miniaturized electronics on each sensor interact with any incoming light first. This reduces the area of the pixel which is sensitive to light. To correct for this, front-illuminated CMOS sensors use microlenses to improve the light-collection efficiency of each pixel, however these microlenses limit the sensor’s peak quantum efficiency, with the quantum efficiency reducing with the incidence angle of incoming light (see Figure 3).

In comparison, back-illuminated CMOS sensors illuminate the sensor from behind, meaning that the incident light interacts with the light-sensitive silicon first. This allows the entire pixel to be light-sensitive and removes the need for microlenses. This change in illumination technology allows for an increase in peak quantum efficiency [8].

Not only does advanced CMOS technology, such as that of the COSMOS camera, match the essential parameters required from EMCCDs when detecting high-speed objects, it does not suffer the same sensitivity limitations of the EMCCD with regards to excess noise factor. CMOS sensors don’t have an EM register, meaning that they do not suffer from excess noise due to the stochastic nature of the multiplication steps. Removing this limitation of EMCCDs allows low-noise CMOS sensors to far exceed EMCCD sensitivity when greater than a few photons are detected. Minimizing read noise is still of the utmost importance, but the 0.7 e- read noise of the COSMOS allows low-light signal to be detected with a high signal-to-noise ratio.

Due to the architecture of CMOS sensors, data can be processed much faster than both EMCCDs and CCDs. CMOS sensors have a miniaturized capacitor and amplifier on each individual pixel, allowing the CMOS sensor to work in parallel, with each converted photoelectron being immediately converted into a voltage while still on the pixel.

CMOS sensors also have an analogue-to-digital-converter (ADC) for each column, rather than a single ADC as with EMCCD sensors. ADCs convert the voltage of electrons into a digital signal which is used to display data. Having an ADC per column means that each ADC has less data to process, therefore the whole sensor is able to process all of the acquired data at a much faster rate. Figure 4 shows a typical schematic of CMOS readout architecture in comparison to that of an EMCCD. This allows CMOS detectors to run at very high frame rates – ideal for dynamic imaging.

High-speed, ground-based space science applications often require a large field of view in order to sample large areas of the sky. For example, space debris, in particular low-Earth orbit debris, moves quickly across a field of view (in the order of seconds). These objects can be tracked either by leap-frog tracking, in which the object moves across the field of view creating an object arc, or by continuous tracking, in which the object is point like and background stars appear as arcs. Both of these tracking methods rely on the telescope accurately moving either with the object (as with continuous tracking) or predicting the position of the object once it passes the field of view (as with leap-frog tracking) [9].

A camera with a larger field of view can be advantageous for both methods. For example, leapfrog tracking a larger camera FOV results in the object taking longer to traverse across the sensor. This means that fewer telescope movements will be required for imaging the full object trajectory, increasing the accuracy of tracking.

For continuous tracking, a larger camera FOV will result in more background stars for reference, aiding in predictions of object parameters. The COSMOS is one of the largest format CMOS sensors, with sensor sizes of 6k x 6k and above (see Figure 5). In combination with lower read noise and high QE, the COSMOS allows for precise tracking of fainter, and smaller, objects such as low Earth orbital space debris [9].

Ground-based, high-speed astronomical observations require cameras with high frame rates, fast read-out, and low read noise. Although EMCCDs are traditionally used, they are severely limited when detecting a signal greater than single-photon due to the excess noise generated within the multiplication step.

Previously, CMOS detectors were disregarded for high-speed observations. Although they had fast frame rates and low frame times, they had considerably higher read noise and lower QE than EMCCDs. Advancements in CMOS technology have now allowed for back-illuminated CMOS detectors, such as the COSMOS camera, to provide equivalent read noise and QE to EMCCDs without the sensitivity limitation. The COSMOS incorporates a large format sensor which allows more of the sky to be sampled, something which is advantageous in high-speed applications such as space debris tracking.

[4] S. M. Tulloch, V. S. Dhillon, On the use of electron-multiplying CCDs for astronomical spectroscopy, Monthly Notices of the Royal Astronomical Society, 441, 1, 2011 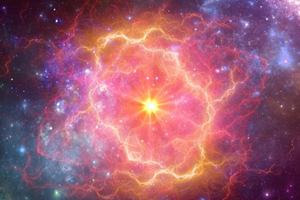 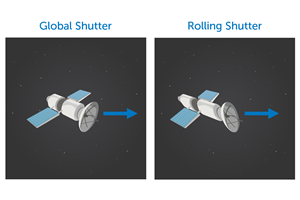 Find out more about how true global shutter on back-illuminated CMOS sensors has been achieved with LACera™ Technology.