Understanding the response of materials under the rapidly evolving extreme conditions induced by shock-compression is of great relevance to many industries whose work involves high-strain-rate phenomena, such as aerospace design, advanced materials processing and mining, renewable energy research, and defense technology.

In extreme environments like these, where loading conditions typically last for only a few microseconds, the bulk mechanical behavior of materials is governed by the interplay of numerous mesoscopic damage processes. However, the evolution of these fundamental deformation processes (e.g., local phase changes, strain localization, and crack pattern growth) is inaccessible via commonly employed diagnostics based on visible radiation, such as photonic Doppler velocimetry and high-speed imaging. Therefore, to better understand the performance of current materials and assist in the intelligent design of materials with predefined properties, new techniques capable of providing an unobstructed view of in-material damage are required.

In-house x-ray radiography has long been employed in extreme environments to image subsurface deformation in materials. In recent years, third-generation synchrotron light sources and free electron lasers have extended the capabilities of dynamic x-ray imaging to the submicron and sub-nanosecond scales in macroscopic samples. These increased capabilities not only allow finer insight into material deformation but also place higher demands on detector technology.

In this application note, the use of high-energy synchrotron x-ray radiography to study shock-induced deformation in high-Z materials is discussed. Key to this research is the Princeton Instruments PI-MAX4:1024i intensified CCD (ICCD) camera with a Gen III filmless intensifier, which permits fast imaging in low-photon scenarios.

Figures 2 and 3 show a photograph of the experimental apparatus assembled at Beamline I12 and a photograph of the PI-MAX4 ICCD camera’s optical relay, respectively. The large size (11 x 7 x 4 m) of the second experimental hutch at Beamline I12 facilitates large-scale experiments, allowing several diagnostics to be fielded simultaneously. To protect against damage from Compton-scattered x-rays, the optical relay and camera are shielded with 2 mm of lead.

Periodic structures with well-defined, customizable porosity are of great interest to safety applications where impact or blast stresses may be dissipated by the process of successive pore collapse. To examine the intricacies of the blast mitigation process in more detail, well-defined stainless steel lattice structures were produced by selective laser melting (SLM) and subject to dynamic radiography testing. Figure 4(a) shows a photograph of a typical SLM lattice structure and Figure 4(b) presents an illustration of the impact experiment.

Although visible radiation methods such as high-speed imaging in-silhouette may reveal the kinetics of the pore collapse process in open structures, penetrating x-ray radiation is required to resolve density changes throughout the system. These measurements may then be fed back into material models to guide the design of better-performing systems. Figure 5 shows a series of in-situ radiographs captured before and during the impact experiments. One radiograph was captured per shot with a 12.5 x 12.5 mm field of view and 500 ns exposure. In each dynamic image, the cylindrical projectile enters from the left. Repeat experiments were performed to stroboscopically step through the deformation process.

The dynamic radiographs reveal the localized propagation of damage throughout the lattice structures. Future work will continue to compare deformation observed in the radiographs to the predictions of 3D hydrocode simulations, providing novel data to evaluate material strength and design models.

It should be noted that another new addition to the PI-MAX®4 series, the PI-MAX4:2048f, now provides four times the imaging area and resolution of any other scientific ICCD camera currently available. This large-format camera, which employs a 2k x 2k CCD fiberoptically coupled to one of several 25 mm diameter Gen II or Gen III filmless intensifiers, offers SuperSynchro, high frame rates (6 MHz / 16-bit digitization), and a 1 MHz sustained gating repetition rate.

Complete control over all PI-MAX4:1024i and PI-MAX4:2048f hardware features is simple with the latest version of Princeton Instruments’ LightField® data acquisition software (available as an option). Precision intensifier gating control and gate delays, as well as a host of novel functions for easy capture and export of imaging data, are provided via the exceptionally intuitive LightField user interface.

The study of dynamic material deformation via synchrotron x-ray radiography promises to reveal new details on fundamental damage processes in condensed matter, which may be used to evaluate the results of leading numerical models. This interplay between novel experimental data and advanced modeling can assist in the design of better-performing materials for the advanced materials processing, aerospace, defense, and renewable energy industries.

To learn about research being conducted by the Institute of Shock Physics, Imperial College London, please visit: https://www.imperial.ac.uk/shock-physics

The authors would like to acknowledge the continued support of this project by Imperial College London, EPSRC, STFC, and AWE. Additionally, the authors would like to extend their gratitude to all who assisted in performing experiments at the Diamond Light Source: Steven Johnson and David Pittman (sample preparation); Mark Collison, David Jones, Jasmina Music, Sam Stafford, Gareth Tear, Thomas White, and John Winters (experimental assistance). 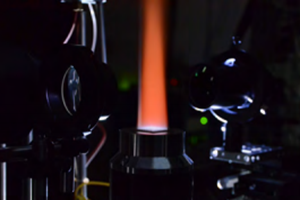 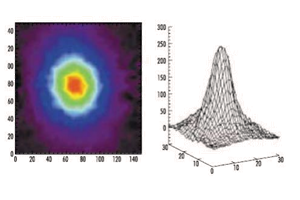 An article discussion the characterization of plasma turbulence for optimization of fusion power sources.