For scientific cameras, there is a linear relationship between photoelectrons released and gray levels displayed. The gain is the gradient of this linear response and is expressed in electrons (e–)/gray level (ADU).

For example, if a camera has a gain of 6 e–/gray, then for each 6 photoelectrons of captured signal the displayed value increases by 1 gray level.

The maximum signal that a pixel can contain is also determined by the gain, as well as the bit depth of the camera. For a 16-bit camera, our maximum gray level value is 65,535 – multiplying this (minus any offset value) by the gain provides the available full well capacity – the maximum signal in photoelectrons we can detect.

The offset of a camera refers to the small number of electrons that are within a pixel well before any photons are detected. These determine the black level (i.e. lowest level) of the pixel array. This is to ensure that there are no zero value pixels as no information can be created from a 0 value. As the full well capacity is also a property of the sensor, typically the default gain value for a camera is chosen such that the sensor full well is matched to the maximum displayable signal.

EMCCD cameras differ as they introduce an additional EM gain factor. Through multiplying detected photoelectrons, read noise is overcome even for very low signals, with this multiplication dividing the resulting gain value. Therefore, EMCCDs in low-light imaging modes have very high gain, for example around 0.03 e–/gray.

How to calculate the gain

The system gain can be measured using a mean variance test via the following steps: 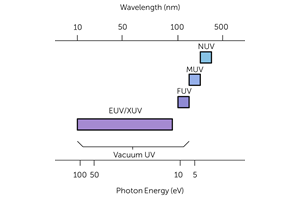 There are many subcategories of UV light, each which need different sensor requirements. These include both physical and chemical sensor changes. 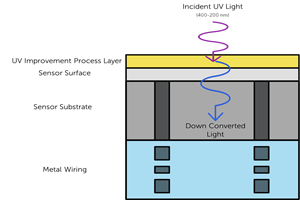 There are two processes which can be used to enhance UV sensitivity for wavelengths >200 nm: UV photon conversion, and anti-reflection coatings.