Variation in the signal resulting in uncertainty in the image data is referred to as noise. It can be produced by the sensor, surrounding electronics, temperature of the system and via natural fluctuation. Below is a short summary on each of the noise sources that can be generated from a scientific camera.

The lower the read noise, the easier it is to detect weak signals that may have been hidden by higher noise levels. It also allows for a higher dynamic range, allowing for the difference between signal levels to be detected more accurately.

Dark current is the result of thermally generated electrons which build up on pixels even when the sensor is not exposed to light. The longer the exposure time, the more dark current that accumulates, which is why it is documented as e–/p/s. Dark current noise is the charge generated from dark current. Dark noise can be calculated as:

Dark current noise is common across all sensor types and is predominately reduced via thermoelectric cooling or cryogenic cooling.

Photon shot noise is the only noise type that cannot be controlled. This noise source is due to natural photon fluctuation and is emitted randomly following Poisson behaviour. It is expressed as the square root of the signal. Although it grows with signal, it is more significant at low signal applications. Photon shot noise is defined as:

When the photon noise exceeds the read noise, the data is said to be photon shot noise limited.

Clock induced charge (CIC), otherwise known as spurious charge, is the charge generated by the transfer of charge through the device. As charge is transferred between pixels, there is a small probability that ionization will occur, adding further unwanted (i.e. not from incident light) charge.

CIC does not contribute much to the overall noise of the image and is usually much less in comparison with dark noise and read noise. However, EMCCD sensors take advantage of ionization to enhance overall charge and in turn also increases the likelihood of CIC. This is because the CIC is amplified by EM-gain, so as the signal is multiplied so is the noise.

CIC can be corrected through the use of a spurious noise filter, which identifies the affected pixels and replaces their signal value by the mean of pixels immediately surrounding the problematic pixel.

Pattern noise is the background pattern of ‘hot’ (bright) and ‘cold’ (dark) pixels on an image and is common within sCMOS sensors. It is caused by small variations in the responsivity of individual pixels on the sensor. These variations include the difference in background offset (bias) value between each pixel column, as well as any changes in the read noise of sCMOS sensors.

Noise is the variation in signal that results in uncertainty in the image data. It can be produced by the sensor, the electronics, temperature of the system and by fluctuation phenomena.

Dark current is caused by thermally generated electrons, which build up on pixels regardless of whether the sensor is exposed to light. Dark current noise is the charge generated from dark current and is common across all sensor types but can be reduced by deep cooling of the camera.

Photon shot noise is the noise generated from the natural fluctuation of photons and is emitted randomly. It cannot be controlled and is expressed as the square root of the signal. Although it increases with signal it is more evident at lower signals.

Clock induced charge (CIC) is generated by the transfer of charge through the device. During transfer there is a small probability ionization will occur adding unwanted CIC. Although CIC does not contribute much to overall noise it is evident in EMCCD sensors. When signal is multiplied through EM-gain so is the CIC, multiplying the noise.

Pattern noise is common within sCMOS sensors and is caused by the variations in the responsivity of individual pixels on the sensor. 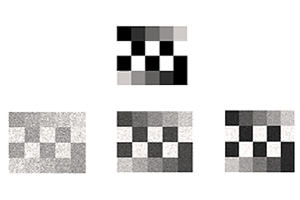 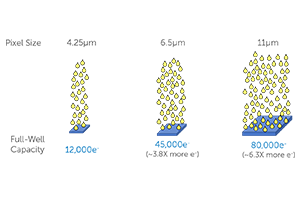 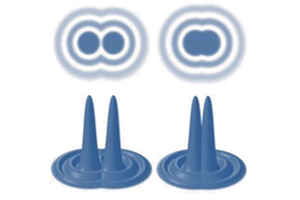